In the past, the discussion of broadcasting and communication convergence with IPTV legislation is in full swing. This question came from the briefing of journalists at the time. “SO is raised” cable TV, that is, SO, which refers to a comprehensive wire broadcaster (SO). It was a question that asked for the protection and development policy of cable TV operators who became Old Media with the advent of IPTV.

But an unexpected answer came out. The question of asking ‘so’ was a real cow and gave a wrong answer. It was a witty query, but for a moment, silence flowed.

More than a decade later, this scene is overlapped these days when Yoon Seok -yeol, who envisions a new government. According to the President’s Acquisition Committee, I wonder if I know the meaning of “digital” and “digital transition.”

It is difficult to convince it considering that the digital platform government has made a pledge, and it is a government to achieve digital innovation until the private sector.

In particular, it is the presidential office. The new government has introduced the two -room (secretary’s office, national security office) and five chiefs (political affairs, economic, social, civil society, and public relations). ICT and science were excluded. There is no objection to the cause of the president’s office slim, but the human passage to envision, advice, and concrete future food has been blocked.

As a result, the new government was expected to have a senior secretary in charge of ICT and science.

In addition, Mr. Yoon has made a pledge of 1 million digital talents along with the importance of information technology, and the exclusion of ICT and Science Senior Secretary has returned to the ICT industry. In particular, the news that the science and technology advisory in the current government was reduced to the scientific secretary and the digital innovation secretary would disappear at all.

The digital platform government, which the new government will complete and export in the next three years, is a intensive intensive for digital innovation. Artificial intelligence (AI) and cloud computing, which are the core elements of the Fourth Industrial Revolution, should be harmonized with AI and cloud computing, and the creation, management and utilization of data is very important.

In particular, it is not easy to realize the current horizontal department structure to complete the establishment of the digital platform government. This is why the necessity of data governance to integrate the ministry is raised. This is why it was argued that the chief secretary was needed as a control tower to upgrade the Ministry of Science and Technology Information and Communication to the deputy prime minister and to manage it in the president’s office.

Recently, the Lee Migration Committee has planned to promote a digital national strategy based on 6G mobile communication and AI. He also presented a specific goal to demonstrate the world’s first 6G communications by 2026.

However, considering the new government’s position or move revealed through the acquisition committee, it is feared that the digital platform government or digital national strategy will end in a fire.

Digital painting and digital conversion, which countries around the world are running with a response strategy, are not as easy as changing analog into digital.

This is because we have to use big data and clouds that have AI to the world’s best network infrastructure to maximize digital utilization capabilities, apply them to all industries, and strengthen their national competitiveness.

It is time for a new government to understand the digital and to execute it as president of the president.

This is a checklist of software port numbers made use of by the methods of the transportation layer of the complying with Web protocols for the installation of host-to-host link.
Traditionally software ports are made use of by TCP (Transmission Control Protocol) as well as UDP (Individual Diagram Protocol) protocols. These procedures require a solitary port for Full-Duplex web traffic. SCTP (Stream Control Method) and also CCP (Data gram Congestion Control Method) procedures, appeared later use these exact same port numbers by normally picking, and when they exist, the port numbers that match the very same TCP or UDP services.
The Assigned Figures Authority (DIANA) Web is the organization officially in charge of keeping port numbers tasks for particular uses. Nonetheless, in the method of numerous protocols use the wearing numbers that are popular and also taped. Similarly, many main ports influenced describe protocols that have never existed or are no more usual use.
This article lists the port numbers and their additional procedures that experience sufficient usage.

Earlier this month, the Association of Entertainment Software, which is the controlling entity behind the annual E3 Game Convention, revealed that it would not perform the event in person this year due to the persistent concerns associated with the pandemic. According to the statement that gave ESA at that time, it was believed that a digital version of the conference, similar to that carried out in 2021, would happen again this summer. However, according to some new reports that have occurred since then, now it seems that E3 2022 as a whole is discarding.

According to the reporter of the JEFF GRUBS video games industry, it is likely that now a digital iteration of E3 2022 for this summer is also eliminated. In a new video released on YouTube, Grubs briefly explained that it is likely that the digital component of the program does not happen, which means that the panorama of this summer for games ads will be very different from normal. «The E3 has been canceled. Well, physically it has been canceled; Digitally, probably also canceled, Grubs said. 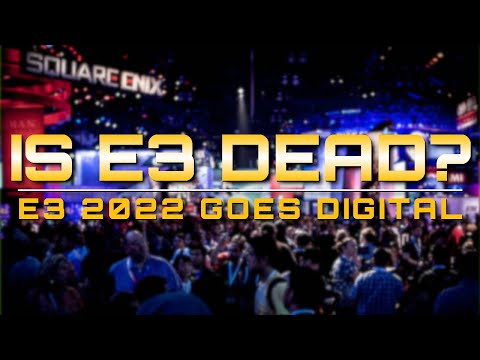 When it comes to what will replace the E3 in the typical window of summer games advertisements, it seems that Geoff Kafka Summer Game Fest program will now occupy a central place. Started at 2020, Kafka created Summer Game Fest as an additional event where video game publishers and developers may reveal new information about some of their upcoming titles. The show expanded a lot in 2021 and Kafka has since confirmed that it will return in 2022. Now, since the E3 apparently will not be carried out at all, it is likely that Summer Game Fest will become the great game event to have in Account in the coming years. Months.

Assuming that the E3 2022 is completely canceled, it remains to be seen if the program will end up returning. At this time, E3 has not been carried out in person from Los Angeles since 2019. On the contrary, the digital edition of the 2021 Conference was very criticized by the Assistants who experienced it. It remains to be seen if that tries or not to bring back the convention in 2023, but there is a good chance that we are just watching the event die in slow motion.

If this is the end of the E3 as we know it, how do you feel? And are you someone who even wants a digital version of E3 2022 to occur? Let me know in the comments or on Twitter in @ mooreman12.